Using service invocation, your application can reliably and securely communicate with other applications using the standard gRPC or HTTP protocols.

In many environments with multiple services that need to communicate with each other, developers often ask themselves the following questions:

Dapr addresses these challenges by providing a service invocation API that acts as a combination of a reverse proxy with built-in service discovery, while leveraging built-in distributed tracing, metrics, error handling, encryption and more.

Dapr uses a sidecar architecture. To invoke an application using Dapr, you use the invoke API on any Dapr instance. The sidecar programming model encourages each applications to talk to its own instance of Dapr. The Dapr instances discover and communicate with one another.

The diagram below is an overview of how Dapr’s service invocation works.

Service invocation provides several features to make it easy for you to call methods between applications.

By default, users can invoke services within the same namespaces by simply referencing the app ID (nodeapp):

Users can specify both the app ID (nodeapp) in addition to the namespace the app runs in (production):

This is especially useful in cross namespace calls in a Kubernetes cluster.

All calls between Dapr applications can be made secure with mutual (mTLS) authentication on hosted platforms, including automatic certificate rollover, via the Dapr Sentry service. The diagram below shows this for self hosted applications.

Applications can control which other applications are allowed to call them and what they are authorized to do via access policies. This enables you to restrict sensitive applications, that say have personnel information, from being accessed by unauthorized applications, and combined with service-to-service secure communication, provides for soft multi-tenancy deployments.

Errors that cause retries are:

Per call retries are performed with a backoff interval of 1 second up to a threshold of 3 times. Connection establishment via gRPC to the target sidecar has a timeout of 5 seconds.

Round robin load balancing with mDNS

Dapr provides round robin load balancing of service invocation requests with the mDNS protocol, for example with a single machine or with multiple, networked, physical machines. 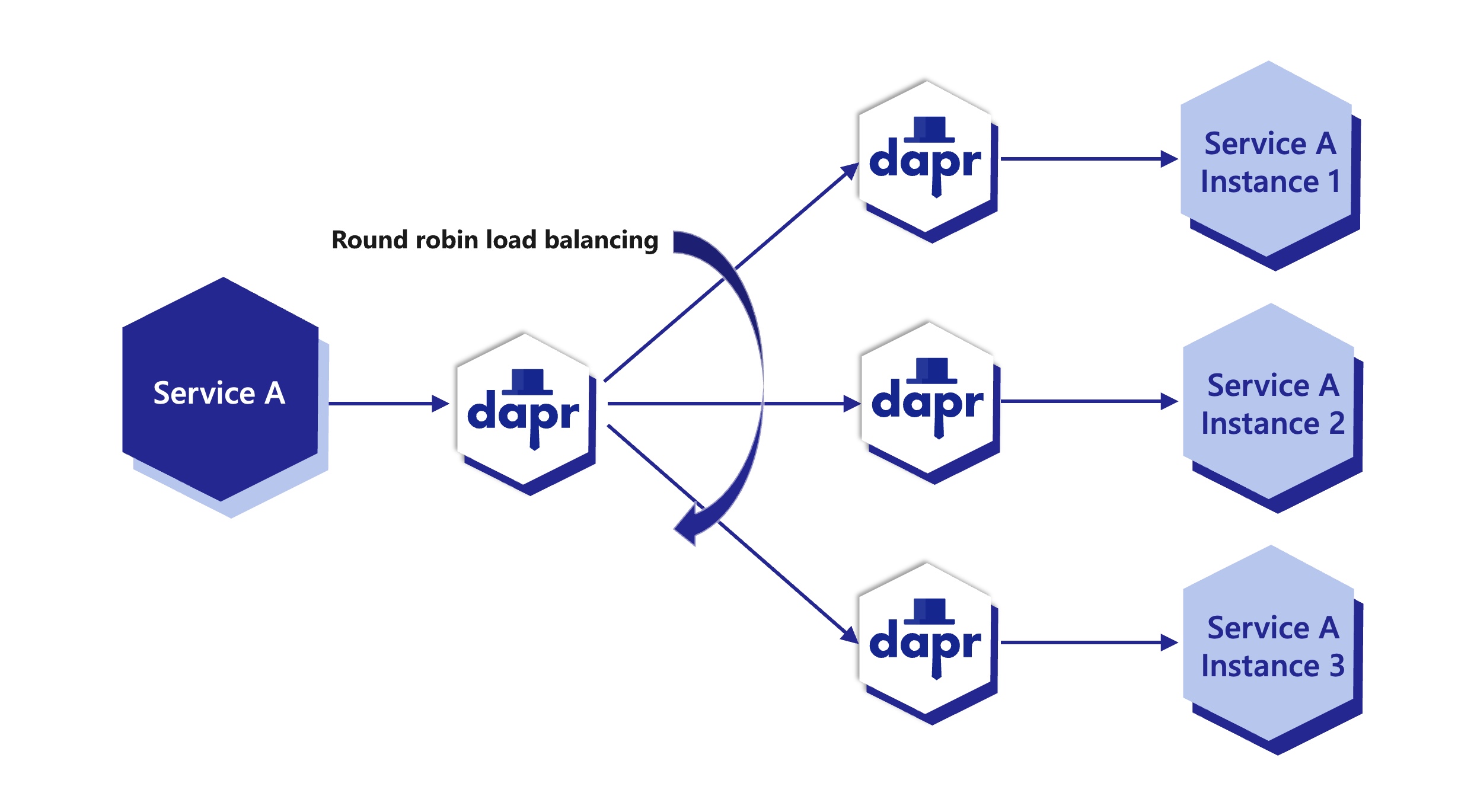 Tracing and metrics with observability

By default, all calls between applications are traced and metrics are gathered to provide insights and diagnostics for applications, which is especially important in production scenarios. This gives you call graphs and metrics on the calls between your services. For more information read about observability.

Dapr allows users to keep their own proto services and work natively with gRPC. This means that you can use service invocation to call your existing gRPC apps without having to include any Dapr SDKs or include custom gRPC services. For more information, see the how-to tutorial for Dapr and gRPC.

The diagram below shows sequence 1-7 again on a local machine showing the API calls: