Dapr uses a modular design where functionality is delivered as a component. Each component has an interface definition. All of the components are interchangable so that you can swap out one component with the same interface for another.

You can contribute implementations and extend Dapr’s component interfaces capabilities via:

As another example, the pub/sub building block uses pub/sub components.

You can get a list of current components available in the hosting environment using the dapr components CLI command.

Each component has a specification (or spec) that it conforms to. Components are configured at design-time with a YAML file which is stored in either:

These YAML files adhere to the generic Dapr component schema, but each is specific to the component specification.

It is important to understand that the component spec values, particularly the spec metadata, can change between components of the same component type, for example between different state stores, and that some design-time spec values can be overridden at runtime when making requests to a component’s API. As a result, it is strongly recommended to review a component’s specs, paying particular attention to the sample payloads for requests to set the metadata used to interact with the component. 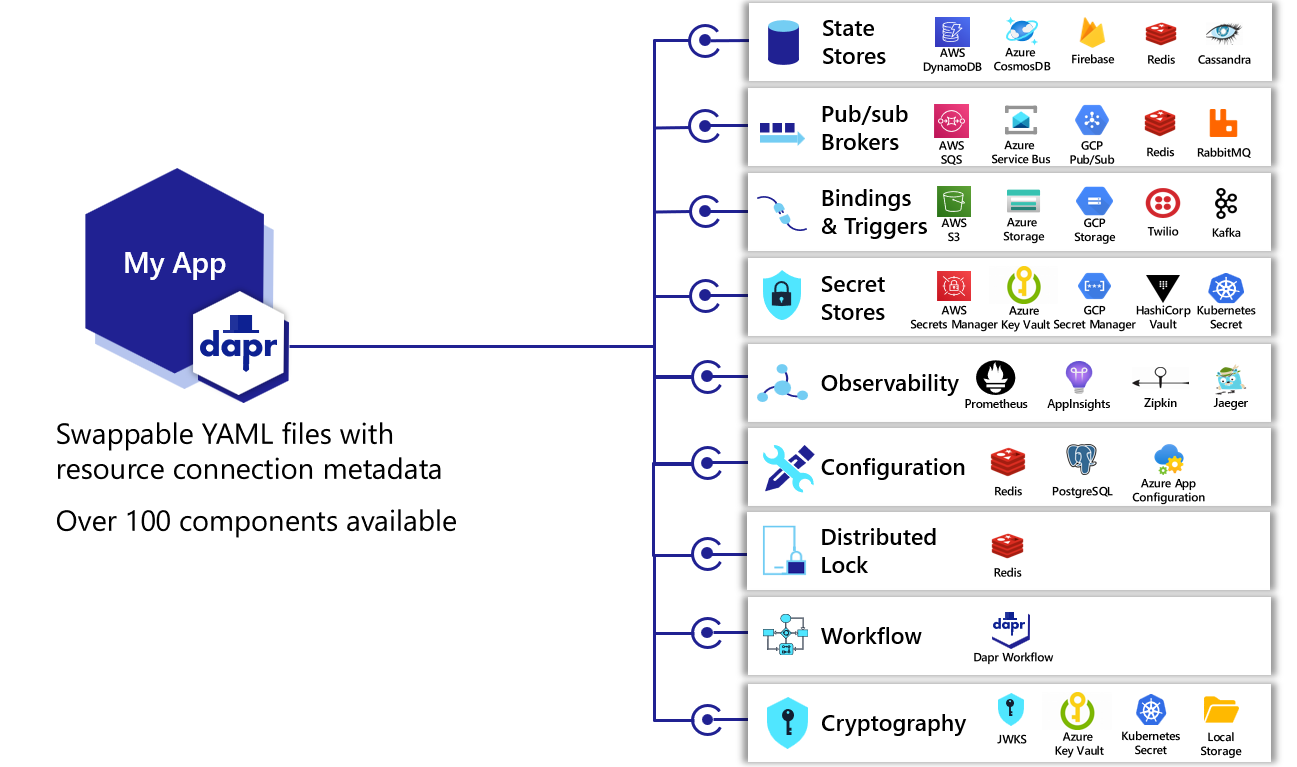 Dapr also allows for users to create their own private components called pluggable components. These are components that are self-hosted (process or container), do not need to be written in Go, exist outside the Dapr runtime, and are able to “plug” into Dapr to utilize the building block APIs.

Where possible, donating built-in components to the Dapr project and community is encouraged.

However, pluggable components are ideal for scenarios where you want to create your own private components that are not included into the Dapr project. For example:

The following are the component types provided by Dapr:

Pub/sub broker components are message brokers that can pass messages to/from services as part of the publish & subscribe building block.

External resources can connect to Dapr in order to trigger a method on an application or be called from an application as part of the bindings building block.

A secret is any piece of private information that you want to guard against unwanted access. Secrets stores are used to store secrets that can be retrieved and used in applications.

Configuration stores are used to save application data, which can then be read by application instances on startup or notified of when changes occur. This allows for dynamic configuration.

Lock components are used as a distributed lock to provide mutually exclusive access to a resource such as a queue or database.

Dapr allows custom middleware to be plugged into the HTTP request processing pipeline. Middleware can perform additional actions on an HTTP request (such as authentication, encryption, and message transformation) before the request is routed to the user code, or the response is returned to the client. The middleware components are used with the service invocation building block.

Since pluggable components are not required to be written in Go, they follow a different implementation process than built-in Dapr components. For more information on developing built-in components, read developing new components.