How Dapr is designed with security in mind

This article addresses multiple security considerations when using Dapr in a distributed application including:

Several of the areas above are addressed through encryption of data in transit. One of the security mechanisms that Dapr employs for encrypting data in transit is mutual authentication TLS or mTLS. mTLS offers a few key features for network traffic inside your application:

Mutual TLS is useful in almost all scenarios, but especially so for systems subject to regulations such as HIPAA and PCI.

The Dapr sidecar runs close to the application through localhost, and is recommended to run under the same network boundary as the app. While many cloud-native systems today consider the pod level (on Kubernetes, for example) as a trusted security boundary, Dapr provides user with API level authentication using tokens. This feature guarantees that even on localhost, only an authenticated caller may call into Dapr.

Dapr includes an “on by default”, automatic mutual TLS that provides in-transit encryption for traffic between Dapr sidecars. To achieve this, Dapr leverages a system service named Sentry which acts as a Certificate Authority (CA) and signs workload (app) certificate requests originating from the Dapr sidecar.

Dapr also manages workload certificate rotation, and does so with zero downtime to the application.

Sentry, the CA service, automatically creates and persists self signed root certificates valid for one year, unless existing root certs have been provided by the user.

When root certs are replaced (secret in Kubernetes mode and filesystem for self hosted mode), the Sentry picks them up and re-builds the trust chain without needing to restart, with zero downtime to Sentry.

When a new Dapr sidecar initializes, it first checks if mTLS is enabled. If it is, an ECDSA private key and certificate signing request are generated and sent to Sentry via a gRPC interface. The communication between the Dapr sidecar and Sentry is authenticated using the trust chain cert, which is injected into each Dapr instance by the Dapr Sidecar Injector system service.

In a Kubernetes cluster, the secret that holds the root certificates is scoped to the namespace in which the Dapr components are deployed to and is only accessible by the Dapr system pods.

Dapr also supports strong identities when deployed on Kubernetes, relying on a pod’s Service Account token which is sent as part of the certificate signing request (CSR) to Sentry.

By default, a workload cert is valid for 24 hours and the clock skew is set to 15 minutes.

Mutual TLS can be turned off/on by editing the default configuration that is deployed with Dapr via the spec.mtls.enabled field. This can be done for both Kubernetes and self hosted modes. Details for how to do this can be found here. 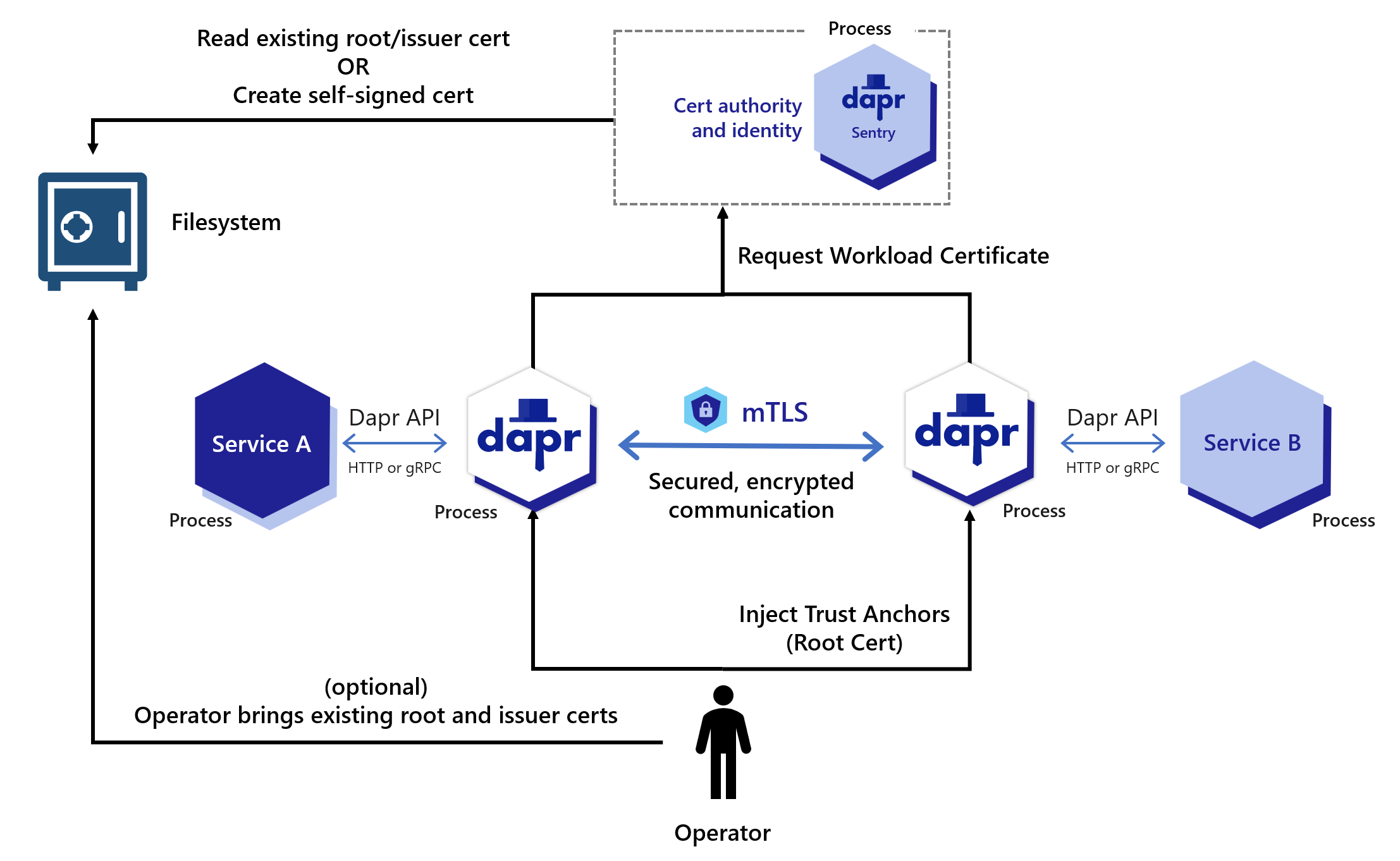 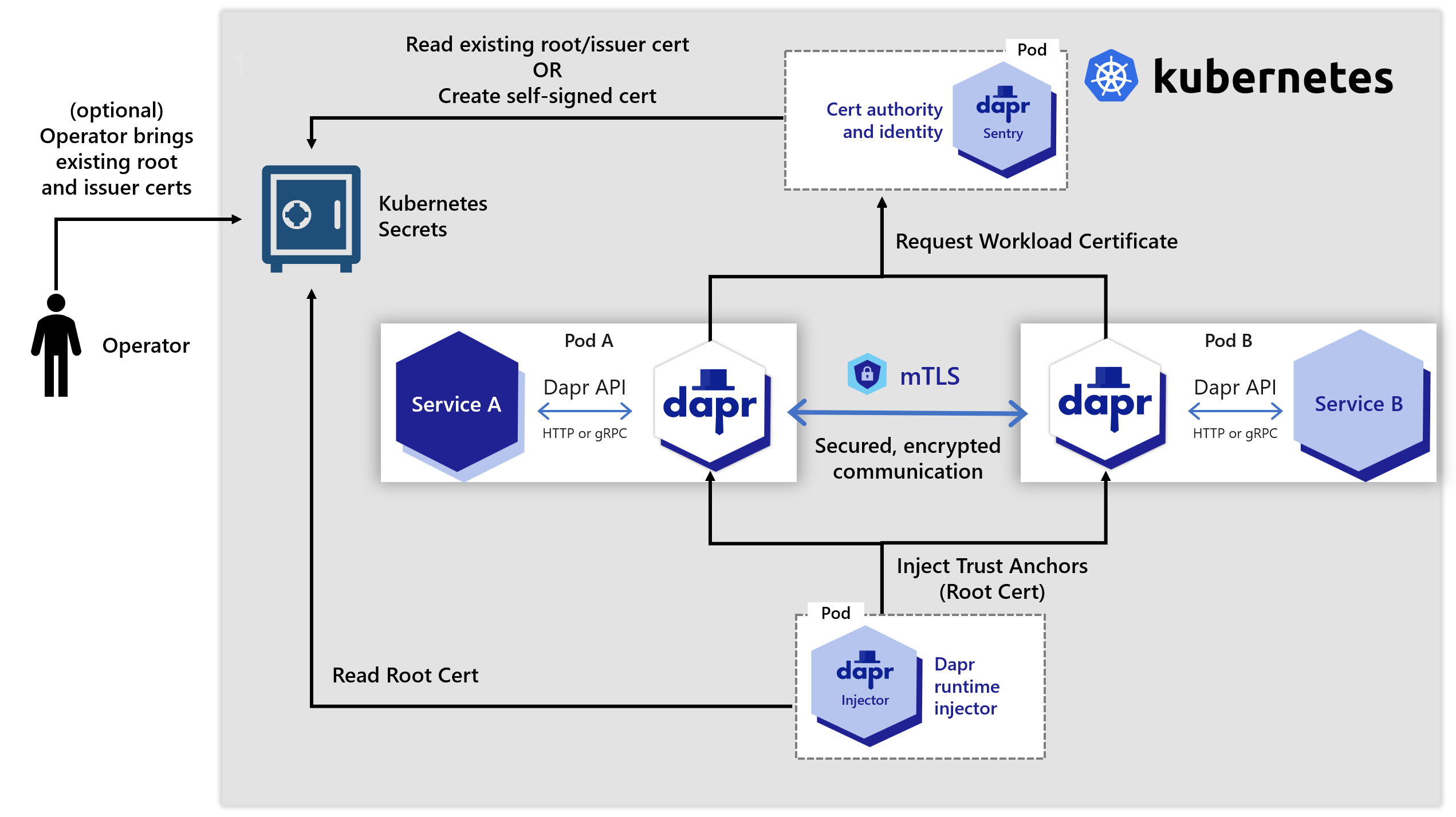 In Kubernetes, when the Dapr system services start, they automatically mount the secret containing the root and issuer certs and use those to secure the gRPC server that is used by the Dapr sidecar.

In self hosted mode, each system service can be mounted to a filesystem path to get the credentials.

When the Dapr sidecar initializes, it authenticates with the system pods using the mounted leaf certificates and issuer private key. these are mounted as environment variables on the sidecar container.

mTLS to system services in Kubernetes

The diagram below shows secure communication between the Dapr sidecar and the Dapr Sentry (Certificate Authority), Placement (actor placement) and the Kubernetes Operator system services 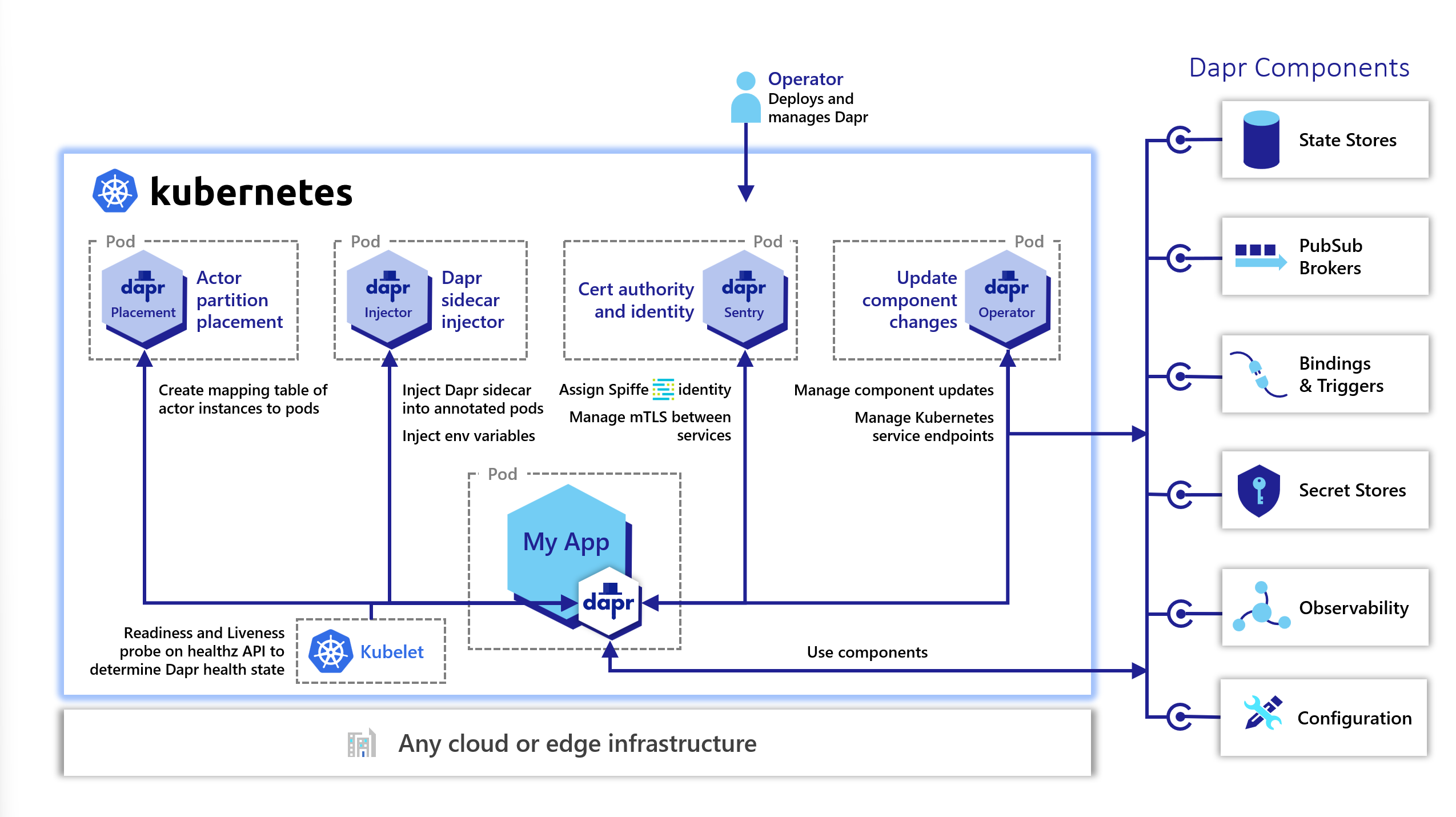 You can adopt common network security technologies such as network security groups (NSGs), demilitarized zones (DMZs) and firewalls to provide layers of protections over your networked resources.

Dapr does not store any data at rest.

Dapr uses the configured authentication method to authenticate with the underlying state store. And many state store implementations use official client libraries that generally use secured communication channels with the servers.

When deploying on Kubernetes, you can use regular Kubernetes RBAC to control access to management activities.

When deploying on Azure Kubernetes Service (AKS), you can use Azure Active Directory (AD) service principals to control access to management activities and resource management.

Threat modeling is a process by which potential threats, such as structural vulnerabilities or the absence of appropriate safeguards, can be identified, enumerated, and mitigations can be prioritized. The Dapr threat model is below. 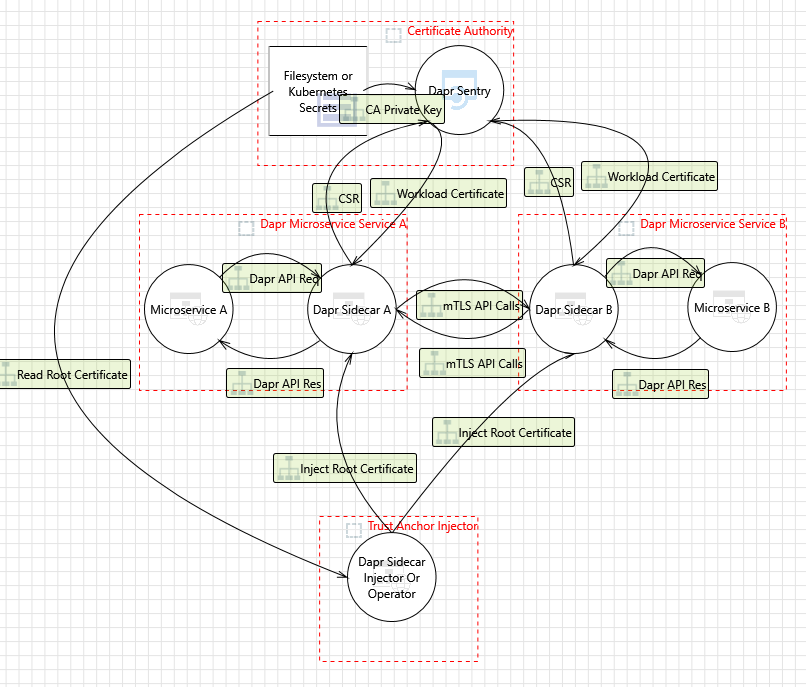 In June 2020, Dapr has undergone a security audit from Cure53, a CNCF approved cybersecurity firm. The test focused on the following:

The full report can be found here.